I mentioned yesterday that I remain pretty relaxed about the latest presidential polls. To explain this, I’d like to nominate two phrases of the year: response rates and reversion to the mean.

I haven’t written about this before, but it’s been a hot topic of conversation in polling circles this year. In a nutshell, lots of pollsters have come to believe that voters are less likely to respond to polls when their candidate does badly. YouGov, which uses a panel-based polling system that allows them to re-interview people, says this:

After the first presidential debate in September, we reinterviewed 2,132 people who had told us their vote intentions a month before. 95 percent of the September Clinton supporters said they intended to vote for her….Of the Trump supporters, only 91 percent said they were still planning on voting for Trump….The net effect was to increase Clinton’s lead by almost four points. That was real change, though significantly less that the ten point change to Clinton’s lead seen in some polls….Other events, however, have not had any detectable impact on voting intentions. We did not see any shifts after the release of the Access Hollywood video, the second or third presidential debates, or the reopening of the FBI investigation into Clinton’s emails.

….Although we didn’t find much vote switching, we did notice a different type of change: the willingness of Clinton and Trump supporters to participate in our polls varied by a significant amount depending upon what was happening at the time of the poll: when things are going badly for a candidate, their supporters tend to stop participating in polls. For example, after the release of the Access Hollywood video, Trump supporters were 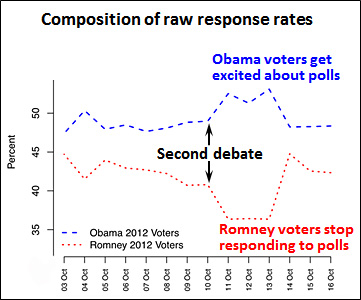 The chart on the right shows what happened to YouGov’s response rates after the second debate: people who had voted for Obama in 2012 answered the phone more, while people who had voted for Romney answered the phone less. This produces a swing in the final poll results, but it’s meaningless. The same people are still out there, and they’re mostly still planning to vote for the same person.

The whole YouGov piece is worth a read, because it does a good job of explaining what this phenomenon is all about, as well as offering possible solutions. But the bottom line is simple: A lot of the poll swings we see in presidential campaigns are probably illusions, demonstrating only changes in the willingness to be polled, not changes in voting intention. If this gets confirmed, it represents a genuine sea change in how we interpret polls.

Reversion to the mean

This theory about response rates might explain another phenomenon that’s been much in evidence this year: reversion to the mean. You can see it pretty clearly in Sam Wang’s meta-margin: 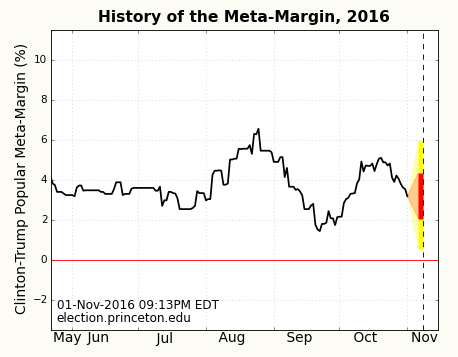 Clinton could easily lose another point before Election Day, or she could revert back to 3.5 and stay there. I’d bet on reversion to the mean. This election features two candidates who have been around a long time and are both very well known. Almost everybody made up their minds pretty early, and nothing much has changed for the past 12 months. Hillary Clinton will most likely win by 3-4 percentage points, plus maybe a little extra because she has a way better ground game.