A lot of reporters and other civilians found Mike, as everyone called him, refreshing. A plucky Irish Catholic kid from Rhode Island, he wasn’t impressed by rank. He told his junior officers to challenge him in 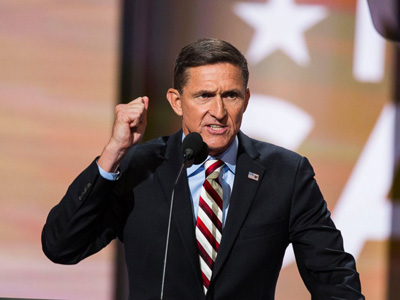 ….The greatest accomplishment of Flynn’s military career was revolutionizing the way that the clandestine arm of the military, the Joint Special Operations Command (JSOC), undertook the killing and capture of suspected terrorists and insurgents in war zones….[Stanley] McChrystal, who was appointed to run JSOC in 2003, brought Flynn in as his intelligence chief….He “boxed him in,” someone who had worked with both men told me last week, by encouraging Flynn to keep his outbursts in check and surrounding him with subordinates who would challenge the unsubstantiated theories he tended to indulge.

Sounds like a good guy who just needs a little direction. So, um, what happened?

In 2012, Flynn became director of the Defense Intelligence Agency….“He made a lot of changes,” one close observer of Flynn’s time at the D.I.A. told me. “Not in a strategic way—A to Z—but back and forth.”

Flynn also began to seek the Washington spotlight. But, without loyal junior officers at his side to vet his facts, he found even more trouble. His subordinates started a list of what they called “Flynn facts,” things he would say that weren’t true….Flynn’s temper also flared. He berated people in front of colleagues.

….Flynn had been on the job just eighteen months when James Clapper told him he had to go….Flynn began saying that he had been fired because President Obama disagreed with his views on terrorism and wanted to hide the growth of ISIS. I haven’t found anyone yet who heard him say this while he was still in the military….As Flynn’s public comments became more and more shrill, McChrystal, Mullen, and others called Flynn to urge him to “tone it down,” a person familiar with each attempt told me. But Flynn had found a new boss, Trump, who enlisted him in the fight against the Republican and Democratic Party establishments.

Well, I guess it will all work out. Donald Trump will provide a firm hand at the—wait. What’s this?

President-elect Donald Trump has received two classified intelligence briefings since his surprise election victory earlier this month….A team of intelligence analysts has been prepared to deliver daily briefings on global developments and security threats to Trump in the two weeks since he won.

….Officials involved in the Trump transition team cautioned against assigning any significance to the briefing schedule that the president-elect has set so far, noting that he has been immersed in the work of forming his administration, and has made filling key national security posts his top priority. But others have interpreted Trump’s limited engagement with his briefing team as an additional sign of indifference from a president-elect who has no meaningful experience on national security issues.

So Trump thinks that his work schedule will lighten up after he actually becomes president? And then he’ll have time to get up to speed on all the stuff he doesn’t know? And rein in Flynn at the same time?

We are so screwed.