Here is PolitiFact’s final tally of Trump vs. Clinton in the contest to see who lies their ass off the most: 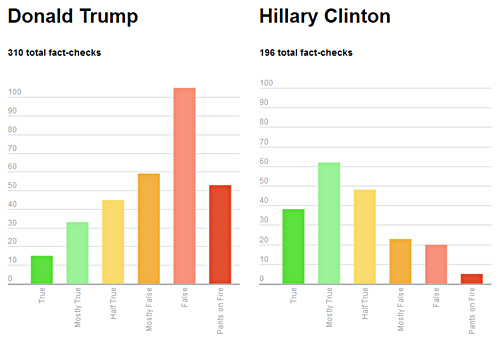 For the arithmetically challenged, 51 percent of Trump’s statement were categorically false, compared to 13 percent of Clinton’s.

The only reason I’m putting this up is because we’ve all gotten so bored with it. Trump lies so consistently and so baldly that we barely even notice it anymore unless he says something truly outrageous—with the bar for “outrageous” moving upward all the time. Trump has ushered in an era of not merely exaggerating or cherry picking or twisting or evading. He just says anything he wants, and his followers buy it. This isn’t normal, and we shouldn’t accept it as normal.

On the flip side of the coin, we now have 25 years of evidence that Hillary Clinton is a pretty honest politician. Sure, she evades sometimes and she tries to tap dance around the truth sometimes. But she doesn’t do this any more than most politicians. She’s simply been the target of a massive, never-ending campaign from conservatives and the press to pay far more attention to her misdemeanors than they do to any other politician.

I’ve said it before and I’ll say it again: Hillary Clinton is one of the most honest politicians on the American stage.