Donald Trump has named South Carolina Gov. Nikki Haley as his ambassador to the UN. This is, as Dan McLaughlin says over at National Review, a little puzzling. It’s puzzling first because it’s not clear why Haley would want the job. And it’s puzzling second because she 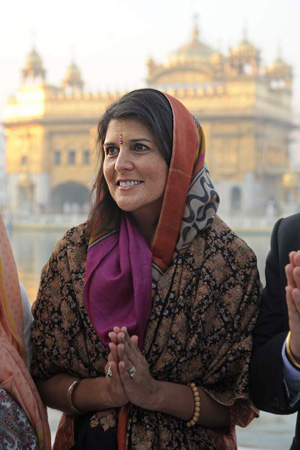 has no foreign policy background and has criticized Trump in the past:

Does the willingness to hire Haley tell us much about Trump? I doubt we will see much in the way of ideology as the basis of any of Trump’s hires outside of the jobs that handle immigration and trade policy. Sure, it shows Trump hiring a former critic, but first, Haley endorsed Trump in the general election and stuck by that endorsement without wavering (unlike, say, Kelly Ayotte or Joe Heck, who now seem persona non grata with Trump); second, it could sideline a potential (if unlikely) 2020 primary threat by bringing her inside the tent without giving her a position of great influence; and third, it rewards an early Trump endorser, South Carolina Lieutenant Governor Henry McMaster, who will now become Governor and could run in 2018 as the incumbent.

Conservatives just can’t bring themselves to admit what Trump is up to, can they? So let’s cut through the chaff and go straight to Wikipedia:

Haley is a woman, and she’s the daughter of immigrants. Trump wants a few non-white non-males in his cabinet, and he likely couldn’t care less about the UN. So why not? He’s not rewarding anyone and he’s not worried about 2020. Nor does he care that Haley is bizarrely unqualified for a job that dozens of people would kill for. He’s just checking off a box.