Sam Wang’s meta-margin hasn’t changed much in the past week. He now has Hillary Clinton leading Trump by 4.4 percentage points: 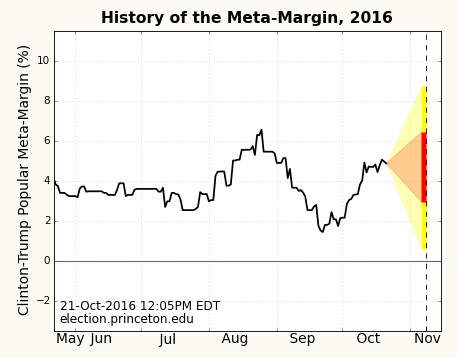 Wang’s current prediction is that Clinton has a 99 percent chance of winning and will rack up 339 electoral votes. He still has the Senate tied, 50-50, but the Democratic meta-margin is up to 1.7 percent and the probability of Democratic control is 79 percent. On the House side, he has Democrats up by about 5 percent, which is not enough for them to win back control. Here’s Pollster: 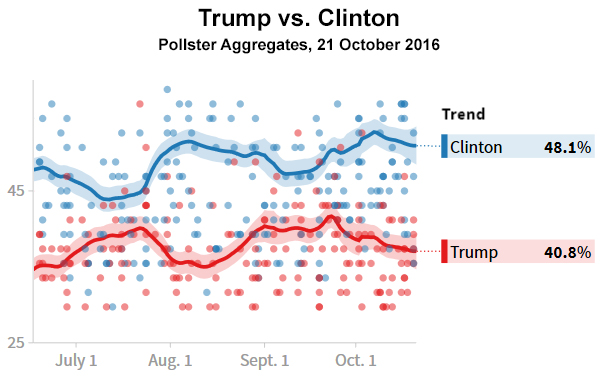 Clinton has dropped a point and is now 7.3 percentage points ahead of Trump. For what it’s worth, if you look only at high-quality live phone polls, they have Clinton up by a whopping 9.5 percentage points. In the generic House polling, Pollster has Democrats ahead by 5.2 points, down a bit from last week.

If you add to all this the fact that Clinton almost certainly has a far superior GOTV operation compared to Trump, she could win the election by anywhere from 6 to 10 points depending on what happens over the next couple of weeks. Republicans appear to have resigned themselves to this, and are now putting all their energy into downballot races. This means the Senate is likely to be very close, and the House will probably stay in Republican hands—though only by a dozen seats or so.