Yeah, yeah, I know. They support Trump even though he’s obviously not religious. Been there, heard it before.

But wait! Chait points to a new PRRI survey that’s genuinely intriguing. It turns out that over the past five years, pretty much all religious groups have steadily given up on the idea of holding politicians accountable for their personal morality. However, the biggest change by far has come from white evangelicals. In 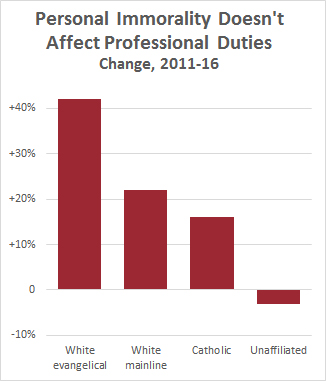 2011, they were the least willing to accept personal lapses. Today, they’re the most accepting.

Is this purely political? In 2011, after all, their touchstone was a liberal Democratic president. In 2016 their touchstone is a conservative Republican presidential candidate. Maybe their willingness to forgive moral lapses is purely transactional: they forgive conservatives but not liberals. There’s considerable evidence to back this up if you look at congressional races.

Still, Catholics and mainline Protestants have also moved in the same direction. The religiously unaffiliated have stayed about where they were. Are Christians just steadily abandoning the whole idea that personal morality matters in public life?

Maybe, but I think there may be an alternative explanation. I suspect that a lot of respondents interpret “personal” to mean “sexual.” If that’s the case, this survey may show something much narrower: that even conservative Christians are loosening up on the sexual front. If “personal immorality” largely conjures images of divorce and premarital sex and gay marriage and so forth, then this survey result just means they don’t care about that stuff so much anymore. Is it possible the culture wars have moved on?