What’s going to happen to the Republican Party after November 8? I’ve raised the possibility that if Trump loses massively, the party establishment might get serious about marginalizing the tea party caucus in Congress instead of being held endlessly hostage to them. Most of the responses to that suggestion have been skeptical. The more likely possibility is that tea partiers will increase their 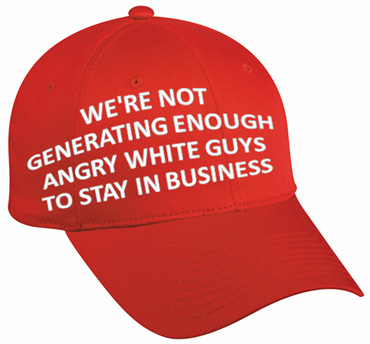 influence and the GOP will become even crazier and more obstructionist than ever.

Republican leaders like Mitch McConnell and Paul Ryan may hope that after Trump’s inevitable defeat the party will return to their brand of conservatism — in favor of free trade and American leadership abroad, cutting government spending and taxes, a balanced approach to immigration, and making deals where possible with centrist Democrats. But that’s not a safe assumption anymore.

….Perhaps Trump will fade away after the election and the Republican Party will return to its Reaganite roots. But…survey findings suggest a strong possibility that instead the GOP, or at least a substantial portion of it, could continue veering toward the fringe, muttering darkly about how Trump was robbed of his rightful victory. If that is the case, then the Republican Party may not survive the Trump takeover.

I want to make this easy. There’s basically only one thing that matters for the GOP: whether they double down on being the white men’s party, or whether they take the painful but necessary steps necessary to broaden their appeal. That’s it. Everything else pales in comparison.

If they continue on their current course, the presidency is going to get further and further out of reach. Eventually they won’t be able to hold on to the Senate or the House either. They’ve simply run out of ways to increase the white vote and suppress the non-white vote, and the demographics of America just flatly don’t support a party that’s increasingly loathed by women and minorities.

Lindsey Graham’s critique of four years ago is famous: “We’re not generating enough angry white guys to stay in business for the long term.” Republicans need to print this on a hat and start wearing it at all times. The Southern Strategy worked great for half a century, but nothing lasts forever. It’s time to abandon it.