It’s a brand new week, and Donald Trump is taking it on the chin over his taxes. So how does he respond? Lamely.

First up, we have a new RNC video—shot in grainy black-and white, natch—claiming that Tim Kaine defended horrible BLACK murderers1 back when he was a defense attorney fresh out of law school. Devastating! Or it might be if every political opponent in Kaine’s career hadn’t tried the same attack. Kaine’s answer has always been the same: as a 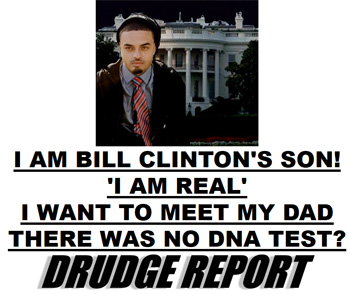 devout Catholic, he’s categorically opposed to the death penalty, and he’s willing to defend even the worst people if it means keeping them off death row. So far he’s batting a thousand with this defense.

Next up, the Drudge Report is bringing up possibly the most ancient attack against Bill Clinton of all time: that he’s the father of a mixed-race child born to a BLACK prostitute he frequented in his Little Rock Days. This story has been part of the Clinton fever swamps for something like 30 years, and even people who don’t like Bill have never given it the time of day. I understand why Drudge is trafficking in this sort of nostalgia—the 90s were good to Matt Drudge—but seriously? Bill Clinton’s “love child” is the best they’ve got?

Any day now, some Trump surrogate somewhere is going to pop up with BRAND NEW EVIDENCE that Bill Clinton ran coke out of Mena airport. I can’t wait. Is this seriously Trump’s campaign strategy?

1Actually, most of them weren’t black. But you could be forgiven for not noticing given the way the ad is shot and the fact that the RNC itself is promoting the video as “Willie Horton style.”