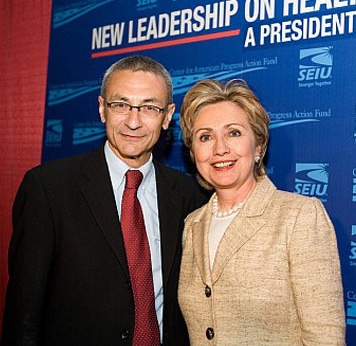 I interrupt today’s news about Donald Trump being a vulgar pig to bring you even bigger news: Hillary Clinton is doomed. “GAME OVER?” asks the shocked headline at Twitchy. “Did the WikiLeaks alleged hack of John Podesta’s emails just cost Hillary Clinton the election?”

Attached are the flags from HRC’s paid speeches we have from HWA. I put some highlights below. There is a lot of policy positions that we should give an extra scrub with Policy.

An “extra scrub with Policy”? WTF does that mean? I guess it doesn’t matter. The important thing is that apparently this poor Carrk fellow was tasked with reading through all of Hillary Clinton’s paid speeches to see if she had said anything that might be embarrassing if it got out. Carrk found about a dozen things, and attached headlines representing the worst possible spin he could think of. Here’s a typical entry:

*CLINTON ADMITS SHE IS OUT OF TOUCH*
….“I do think there is a growing sense of anxiety and even anger in the country over the feeling that the game is rigged. And I never had that feeling when I was growing up. Never….We had good public schools. We had accessible health care. We had our little, you know, one-family house that, you know, he saved up his money, didn’t believe in mortgages. So I lived that. And now, obviously, I’m kind of far removed because the life I’ve lived and the economic, you know, fortunes that my husband and I now enjoy, but I haven’t forgotten it.” [Hillary Clinton Remarks at Goldman-Black Rock, 2/4/14]

I’ll give Carrk credit: he’s pretty creative at coming up with negative spin. Needless to say, though, there’s nothing here—or in any of the other excerpts—that would even remotely reflect badly on Clinton. Feel free to click the link and read the whole email. I promise this excerpt is pretty representative. In fact, if this is the worst they could come up with, I’m a little puzzled about why the campaign didn’t just release the damn speeches and be done with it.

Was there anything else in this email dump? Here’s Politico:

Beyond those excerpts, the emails affirm the campaign’s reputation for extreme caution, with an eagerness to proactively influence news coverage. Whether it’s plotting the candidates’ response to an early attack on influence peddling at the Clinton Foundation or writing jokes for an Iowa dinner speech, ad hoc committees — often incorporating advice from Bill Clinton — are shown agonizing over wording and tone. Under fire, they’re determined “not to look beleaguered,” as one aide put it.

Riveting, isn’t it? Behind the scenes, it turns out, Hillary Clinton is running a—what’s the word I’m looking for? Oh yes: boring. She’s running a pretty boring campaign that basically does all the usual boring campaign stuff.

But of course, this email dump is only the first 2,000 emails, and WikiLeaks promises there are 48,000 more to come. I’m sure the smoking gun is in there somewhere. Probably right alongside the infamous whitey tape that no one ever seems to have tracked down.