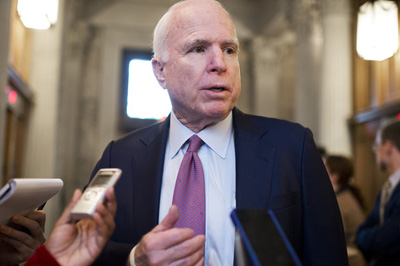 I promise you that we will be united against any Supreme Court nominee that Hillary Clinton, if she were president, would put up, I promise you. This is where we need the majority, and Pat Toomey is probably as articulate and effective on the floor of the Senate as anyone I have encountered.

McCain later “clarified” that he didn’t actually mean what he plainly said, and by the rules of American politics that means we are now supposed to pretend he never said it.

But he did say it. The question is whether he really meant it, or whether it was just campaign blather that went a little too far in the heat of the moment. This is especially salient since McCain was one of the original Gang of 14 who promised to forestall Republican threats to end judicial filibusters back in 2005. If even McCain is on board with endless blind filibusters, we’re in trouble.

My personal guess is that this was, in fact, just campaign rhetoric. After all, at some point government has to work. The Supreme Court needs nine members. The federal government needs a budget. The country has to pay its debts. Even Republicans get that.

Then again, maybe they don’t. It’s a little hard to tell these days. It might be safer all around to simply make sure Democrats get a majority in the Senate and not take any chances.