Let’s give some thought to a journalistic quandary: How should news organization handle the leak of Clinton campaign chairman John Podesta’s hacked emails? 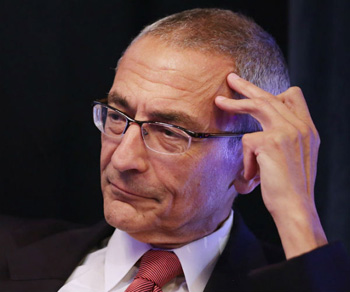 Under normal circumstances there would be nothing much to think about. Once they’re out, they’re out. You trawl through them and print anything that seems newsworthy. Neat and simple.

But consider the circumstances here. There’s evidence that the hack was directed by a foreign power trying to influence the US election. The leak itself came from an organization that detests one of the candidates. And they’re playing a transparently too-clever-by-half game of trying to keep this in the news for weeks by parceling out the emails a few thousand at a time.

Leaks often have a partisan motive, but this one is self-evidently hyper-partisan. So should news organizations allow themselves to be used as pawns in this obvious effort to affect the presidential election? If they do, they can hardly pretend to be neutral channels of information. But if they don’t, they risk failing to report genuinely important news.

What to do? I think there’s a fairly straightforward way to handle this: just dial up the threshold for “newsworthiness” a notch or two. You’d still ignore the obvious trifles, and you’d still report anything truly newsworthy or scandalous. But for stuff in the gray middle, you’d lean against publication.

Since this is not an abstract question, but an actual, concrete issue that affects an actual, concrete candidate named Hillary Clinton, it’s all but impossible to discuss this on its merits. But it’s worth trying. After all, does anyone think that this kind of hack is going to get less common as time goes on?1

1Actually, it might. People in high places might (a) start taking more care to never say anything embarrassing in email, and (b) start encrypting their email and other data more routinely. This might start to make hacking less productive, and eventually kill it off.