1987: Announced his engagement in the Times to Miss Leah Bergdorf-Hunt. “But there was no engagement, and indeed no Miss Bergdorf-Hunt. As revealed in [Private Eye] 690, the whole thing was a fantasy.”

1988: Sued three newspapers over a story that the reporter said came from Gilberthorpe himself. “The three newspapers appealed, and dug out new information which cast serious doubt on the Gilby-Merchant version of events….The newspapers paid not a penny in damages and contributed only £5,000 to his legal costs — leaving him very much out of pocket and with egg all over his face.”

1997: Betrayed his friend Piers Merchant MP, who had come to Gilberthorpe’s home for a weekend visit with his mistress. After cheery goodbyes, Merchant and his girlfriend later found quotes from their pillow-talk and photos of them in bed splashed all over the Sunday Mirror. “Gilby, 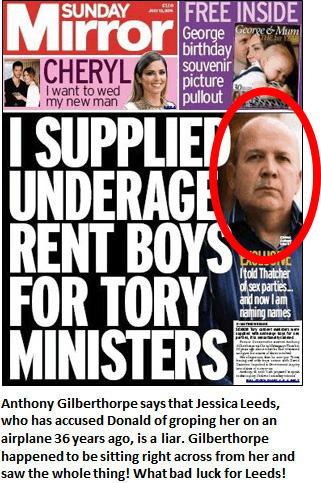 it transpired, had fitted out the spare-room with hidden cameras and microphones and shopped his loyal friend to the tabloid for £25,000.”

2014: Gilberthorpe told the Daily Mirror that he had procured “rent-boys” for senior Tory politicians—all of them conveniently dead—back in the 80s. “Trawling seedy streets during a Tory conference, Gilberthorpe says he was asked to find underage rent boys for a private sex party at a top hotel….In a series of explosive claims about conferences at Blackpool and Brighton in the 1980s, he alleges boys as young as 15 indulged in alcohol and cocaine before they had sex with the powerful politicians.”

Goodness! Gilberthorpe leads quite the active life. So what’s he up to these days? Well, you remember Jessica Leeds, the woman who accused Trump of groping her on an airplane flight 36 years ago? It turns out that Gilberthorpe was there!

Donald Trump’s campaign says a British man is countering claims that the GOP presidential nominee groped a woman on a cross-country flight more than three decades ago. “I have only met this accuser once and frankly cannot imagine why she is seeking to make out that Trump made sexual advances on her. Not only did he not do so (and I was present at all times) but it was she that was the one being flirtatious,” Anthony Gilberthorpe said in a note provided to The Post by the Trump campaign.

….Gilberthorpe, 54, said he was sitting across the first class aisle from the couple and saw nothing inappropriate. Leeds was wearing a white pantsuit, he said, while Trump was wearing a suit and cuff-links, which he gave to his British flight companion.

Indeed, Gilberthorpe claimed, Leeds was “trying too hard” in her attempt to win Trump over. “She wanted to marry him,” Gilberthorpe said of Leeds, who apparently made the confession when Trump excused himself and went to the bathroom.

Well, that certainly sounds credible to me. Apparently this Leeds woman is actually just a common strumpet who embroidered a story but had the bad fortune to be sitting right across from an 18-year-old Gilberthorpe while the events were taking place. “Undoubtedly it was her,” he said. “I have a good photographic memory. I recognized her.”

That’s the worst kind of luck, isn’t it? I mean, what are the odds? But that’s why you have to be so careful these days. There are liars and con men out there everywhere.