Well, it turns out the “unrelated case” that led the FBI to more Hillary Clinton emails was an investigation into Anthony Weiner’s sexting. Because of course it was. It is what we all deserve.

But it’s even stupider than that. In the past, I’ve found Pete Williams to be a pretty reliable guy, and here’s what he has to say:

If Williams is correct, investigators looked at Weiner’s laptop and discovered that Weiner’s wife—Clinton aide and all-around conservative boogeyman Huma Abedin—had also used it. So there are some emails from Abedin to Hillary Clinton on the hard drive. Here’s Williams:

Now they’ve got to go get court process to get the right to…take a wider look at these emails and begin that process. You said earlier this probably won’t be wrapped up before Election Day? Scratch probably.

In other words, nobody has even looked at these emails yet. The FBI has to get a court order first. So: are these emails that have already been turned over? Maybe. Are they routine emails about schedules and so forth? Maybe. Nobody, including the FBI, has the slightest idea. But there’s certainly no reason to think there are any bombshells here.

Needless to say, that didn’t stop every news outlet in the country from blaring this at the tops of their front pages. They never learn, do they? Email stories hyped by folks like Jason Chaffetz never pan out. But news orgs get suckered every time anyway. So just to make sure their shame is preserved for posterity, here they are: 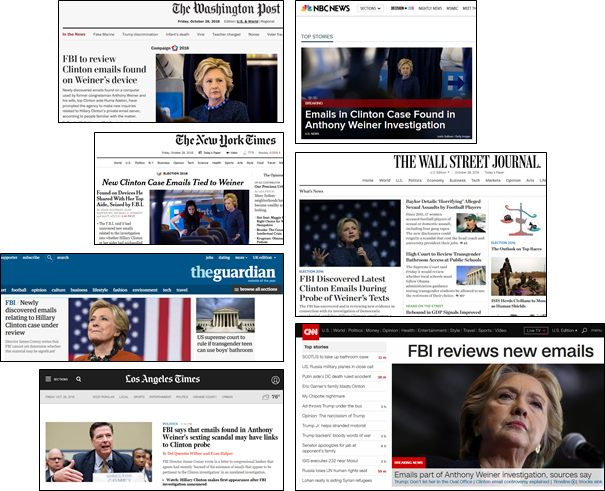