Just when you think that things can’t get weirder, they get weirder. But don’t I say that every day? Lately, yes I do. Nonetheless, Donald 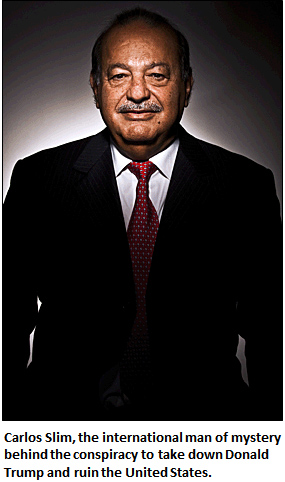 Trump and his brain trust are truly getting even weirder:

Donald Trump will broaden his attack against the media to hit globalism and the Clinton Foundation by charging that Mexican billionaire Carlos Slim is part of a biased coalition working in collusion with the Clinton campaign and its supporters to generate news reports of decades-old allegations from several women.

….As early as Friday, Mr. Trump is planning to claim that Mr. Slim, as a shareholder of New York Times Co. and donor to the Clinton Foundation, has an interest in helping Hillary Clinton’s campaign, according to a Trump adviser. Attacking the Mexican billionaire would allow Mr. Trump to hit several targets. He could slam the “failing” New York Times, which he says had to be “rescued” by a “foreigner”—Mr. Slim, the adviser said.

Here’s what’s great. There’s hardly one American in a hundred who’s ever heard of Carlos Slim. This makes him a great candidate for a master conspirator, of course, since he’s basically a blank slate. And Mexican too! So Trump can pretty much say anything he wants.

But here’s what’s really worth waiting for: watching all the paid shills on CNN—Scottie, Jeffrey, Katrina, etc.—suddenly start spouting mountains of dirt on Slim. The anchors will all carefully let them have their say, and Trump fans will be listening. Then the Washington Post (or someone) will go out to do yet another “What Trump Supporters Really Think” thumbsucker, and they’ll come back with lots of angry white folks swearing that Carlos Slim runs the Illuminati and the Trilateral Commission.

Jesus. What an election.