Good God. Donald Trump has all of cable news on tenterhooks while he makes them wait for his announcement on birtherism. Amazing.

Anyway, Trump is looking especially orange today, and naturally he starts off with a commercial for his new DC hotel. Then some endorsements from Medal of Honor recipients. I suppose he’ll get to birtherism eventually. He’s probably working up the energy to surround it with 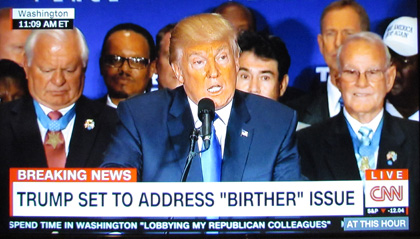 all his usual lies. But really, does it even matter? Josh Marshall thinks not:

Whatever Trump says today hardly matters. Birtherism is a racist smear and a lie. And yet Trump has been repeating it for literally years. As recently as last night. If someone says for years that blacks have smaller brains and are only fit for menial labor or that Jews are parasites and greedy by nature and then finally says “Okay, maybe not, I’m not gonna say that anymore”, who cares? If such racist agitation is ever to be forgiven it’s only with a true recantation and apology and an explanation of why that person said and did such terrible things for so long.

….Birtherism isn’t just not true. It’s conscious and deliberate racist agitation. Trump’s been doing that for years. He’s never explained or recanted or apologized or been held to any account. Whatever he says today we’ll be closely watching to see how campaign surrogates, commentators and especially reporters treat what he says.

UPDATE: Some guy is now telling us that Trump will take a “holistic” approach to national security. lol. So far seven or eight people have taken the stage to endorse Trump.

UPDATE 2: John Berman on CNN: “You could say that he’s leveraging five years of birtherism to sell his hotel.” Jake Tapper: It’s a “political rickroll.” The CNN folks are really upset that they’ve been conned by Trump again. We were told it was an event to address birtherism, instead he’s pulled a bait-and-switch.

UPDATE 3: Trump, finally: “Back in 2008, Hillary Clinton started the birther controversy. I finished it. President Barack Obama was born in the United States, period.” That’s it. What a disgusting human being.

UPDATE 4: Berman says the Hillary Clinton slur is an “untruth.” John King: “We got played.” Tapper: “Factually false.” But they still can’t bring themselves to use the word “lie.”

UPDATE 5: The CNN crew seems to be genuinely disgusted at themselves for being conned yet again by Trump. Is this real? Will it affect their coverage going forward? Stay tuned!