Donald Trump, the scourge of illegal immigrants who are taking away jobs from hardworking Americans, owns a modeling agency that has knowingly employed…illegal immigrants. MoJo’s James West 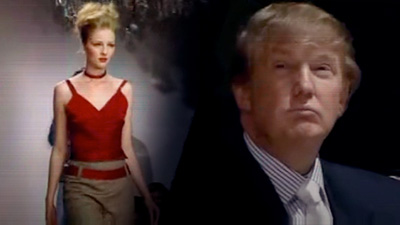 has all the deets, including this strong and gutsy non-denial:

Trump’s campaign spokeswoman, Hope Hicks, declined to answer questions about Trump Model Management’s use of foreign labor. “That has nothing to do with me or the campaign,” she said, adding that she had referred Mother Jones’ queries to Trump’s modeling agency. Mother Jones also sent detailed questions to Trump Model Management. The company did not respond to multiple emails and phone calls requesting comment.

Elsewhere, the Washington Post’s David Fahrenthold and Rosalind Helderman compare and contrast Trump’s charitable giving with that of the much reviled Clinton family’s:

How much money have Clinton and Trump each donated to charity?

For Hillary and Bill Clinton, the total is $23.2 million between 2001 and 2015. That figure comes from the Clintons’ joint tax returns, which the Democratic nominee has released….Clinton and her husband donated about 9.8 percent of their adjusted gross income.

Trump says he is worth far more than the Clintons. He recently claimed his net worth as more than $10 billion….The Washington Post has identified about $3.9 million in donations since 2001 from Trump’s own pocket.

Finally, I love this tweet from Trump’s social media guy:

A beautiful prayer indeed. Note that while everyone else has their head bowed, Trump sits there staring blankly into the middle distance, obviously bored by the whole thing. Such a religious guy.