The Dodd-Frank financial reform bill gave us the Consumer Financial Protection Bureau, designed to protect consumers from predatory lending. So how about a Consumer Pharmaceutical Protection Bureau to protect us from predatory drugmakers? That’s pretty much what Hillary Clinton proposed today in the wake of outrage over the 500 percent increase in the cost of EpiPens. Her proposed agency would be empowered to investigate price hikes for old drugs:

Should an excessive, outlier price increase be determined for a long-standing treatment, Hillary’s plan would make new enforcement 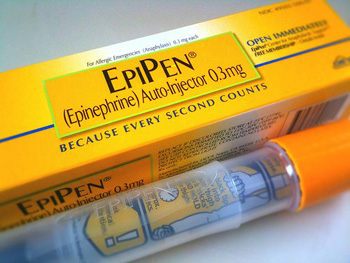 In combination with her broader, previously announced prescription drug plan — which addresses the costs facing consumers from both long-standing and patented drugs — these new tools to address price spikes for treatments available for many years will lower the burden of prescription drug costs for all Americans.

EpiPens are hardly the first case of this happening. We’ve seen it many times before, and Republicans and Democrats alike join in a familiar dance: outrage, congressional hearings, and demands that this kind of price gouging end. But that’s it. Congress has no actual power to do anything, and eventually the attention dies away.

So now Hillary Clinton is suggesting that Congress do more. Instead of cheap grandstanding, create an agency with the power to actually do something. Republicans will rush to agree, right? Because they always claim to be as outraged by this stuff as Democrats. Right?