I’ve been a mite hard on Bernie Sanders, and a couple of weeks ago I was eager to put it behind me. Sanders was scheduled to do some weekend campaigning for Hillary Clinton in Ohio, but when I went to the tape on Monday I discovered that his rallies had been poorly attended (possibly not his fault) and that his pitch for Clinton 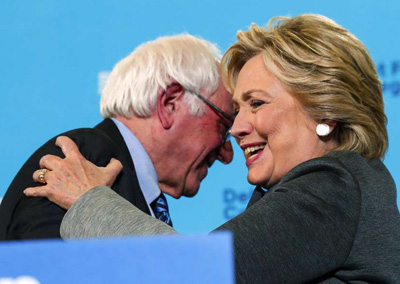 was not notably enthusiastic. So I just said nothing.

Today, however, Ed Kilgore tells me that bygones, apparently, are finally bygones:

Now Sanders is back on the trail not just on Clinton’s behalf but by her side, beginning with an appearance in New Hampshire last night. And his message is significantly more focused on her agenda, and not just as an afterthought….They sounded much more like teammates working together than former antagonists forced to combine forces against a common enemy.

Aside from targeted campaigning, a sharpening of the Sanders message for Clinton, which seemed to be developing in New Hampshire, would be helpful just about everywhere. His new rap about the consequences of a Donald Trump victory, which makes sitting out the election a great moral error, is pretty strong. He might want to add in some reminders of the kind of world Libertarians like Gary Johnson want to build, where, yeah, you can smoke weed, but you’re totally on your own in facing life’s vicissitudes.

In any event, it seems the bad feelings and genuine differences of opinion of the 2016 Democratic primaries are finally fading to the point where Bernie Sanders is an indispensable asset for Clinton. If the race stays close, it could matter a lot.

This is good news for Team Clinton, which needs all the help it can get. Only 40 days to go!