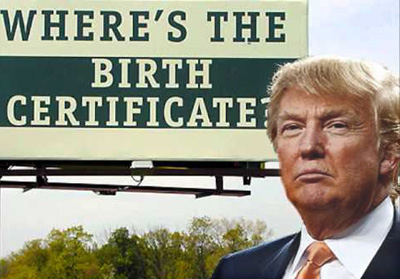 FFS. Once again Donald Trump had a chance to say that he now believes Barack Obama was born in the US, but he refused:

In the interview, conducted late Wednesday aboard his private plane as it idled on the tarmac here, Trump suggested he is not eager to change his pitch or his positions even as he works to reach out to minority voters, many of whom are deeply offended by his long-refuted suggestion that Obama is not a U.S. citizen. Trump refused to say whether he believes Obama was born in Hawaii.

“I’ll answer that question at the right time,” Trump said. “I just don’t want to answer it yet.”

When asked whether his campaign manager, Kellyanne Conway, was accurate when she said recently that he now believes Obama was born in this country, Trump responded: “It’s okay. She’s allowed to speak what she thinks. I want to focus on jobs. I want to focus on other things.”

Just to make things worse, his campaign released a statement saying that Trump does believe Obama was born in the US—even though he won’t say so himself—but the entire statement was a wild farrago of lies from start to finish. Tim Murphy has the details.

I can only assume that Trump doesn’t want to make a clear personal statement about this because he knows that a lot of his supporters still believe it. If he says Obama was born in the US, they might feel like he’s betrayed them.

But you know this is going to come up in the first debate, which is only a little more than a week away. In front of a huge national audience, he’ll either have to betray his base or else look like a crackpot to millions of potential voters. Why put yourself in a situation like that? He could have defused it pretty quietly tonight if he’d wanted to.