Ben Garbarek, a local news reporter in Toledo, asked Donald Trump today what it was that changed his mind about President Obama’s birthplace:

BG: This announcement earlier this week with you saying that you believe President Obama was in fact born in the United States, after all the years 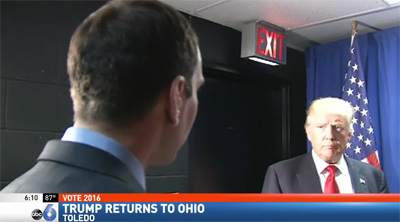 where you’ve expressed some doubt, what changed?

He also asked Trump about his foundation:

BG: And with the Washington Post report out this week about the Trump Foundation. Could you explain to people why you may have used some charitable donations for personal uses?

Trump: The foundation is really rare. It gives money to vets. It’s really been doing a good job. I think we put that to sleep just by putting out the last report.”

This is all the usual gibberish, barely worth taking note of. Except for one thing: Trump must know that he’s going to have to answer these questions in the debate on Monday. Even if Lester Holt turns out to be a complete doofus, he’s going to insist on Trump actually addressing the substance of these issues. When did you change your mind about birtherism? What changed your mind? Why did you use a charitable foundation to pay business expenses? Have you done it more than the two times the Post caught you at?

I know Trump never does anything as lame as prepping for a debate, but his staff must at least be mulling over what kind of answer he’s going to give to these questions. This kind of huffing and puffing isn’t going to cut it on live national television.