When it comes to charity, Dylan Matthews is pretty hardnosed. To earn his approval, a charity better focus on truly important problems and be damn good at it. So how about the Clinton Foundation? After starting out as a skeptic, he says, “I’ve come to the conclusion that the Clinton Foundation is a real charitable enterprise that did enormous good.” 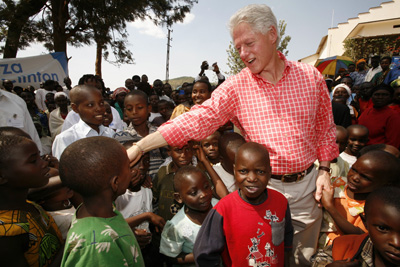 In particular, he praises the Clinton Health Access Initiative, which helped lower the cost of HIV drugs and saved untold lives. But there’s a catch:

And—perhaps uncomfortably for liberals and conservatives alike — it is exactly the kind of unsavory-seeming glad-handing and melding of business and politics for which Bill and Hillary Clinton have taken years of criticism that led to its greatest success….The deals made required buy-in from developing governments. The person tasked with getting that buy-in was a former US president with existing relationships with many of those people. Bill Clinton essentially used his chumminess with foreign politicians and pharmaceutical executives, the kind of thing about the Clinton Global Initiative that earns suspicious news coverage, to enlist their help in a scheme to expand access to HIV/AIDS drugs.

I don’t get it. Why should this make anyone feel uncomfortable? Lots of people have star power, but very few have star power with both rich people and foreign leaders. Bill Clinton is one of those few, so he chose a project that (a) could save a lot of lives, (b) required buy-in from both rich people and foreign leaders, and (c) was right at the cusp where an extra push could really make a difference.

I can’t even imagine why anyone would consider this unsavory, unless they’ve lived in a cave all their lives and don’t understand that glad-handing and chumminess are essential parts of how human societies operate. Matthews may be right that many people feel uneasy about this, but I can’t figure out why. It sounds like Clinton chose to do something that his particular mix of experience and character traits made him uncommonly good at. That’s pretty smart.