The New York Times tells us today how the two candidates are prepping for Monday’s debate. You can probably guess how Hillary Clinton is going about it: methodically, studiously, and seriously. Donald Trump, of course, has no use for actual prep, but nonetheless his team is trying to prepare him for the devious curveballs Clinton is likely to throw at him:

His advisers will try to throw him off balance, and measure his response to possible Clinton jabs like “You’re lying, Donald.”

Clever! Who would ever have guessed she might say something like that to a guy who tells about a dozen lies every day? Then there’s this:

He has paid only cursory attention to briefing materials….Mr. Trump can get bored with both debate preparations and debates themselves….His advisers see it as a waste of time to try to fill his head with facts and figures….Some Trump advisers are concerned that he 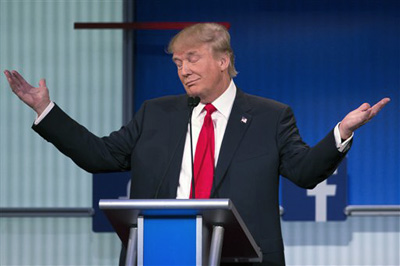 underestimates the difficulty of standing still, talking pointedly and listening sharply for 90 minutes.

Tendency to lie on some issues (like his challenge to President Obama’s citizenship) or use incorrect information or advance conspiracy theories — all of which opens him to counterattack from Mrs. Clinton or rebukes from the moderator. Advisers are urging him to focus on big-picture themes rather than risk mangling facts. If Mrs. Clinton says he is lying, his advisers want him to focus on her trustworthiness and issues like her State Department email and accusations of favors for donors.

Basically, then, Trump’s team is just hoping that he can remain in one place for 90 minutes; not get too obviously bored; tell only a bare minimum of lies; avoid facts and figures since he’ll just screw them up; and pay attention to what Clinton says. Jonathan Chait comments:

There are two ways to read today’s New York Times report from Donald Trump’s debate preparations, or lack thereof. One is that Trump’s advisers are deliberately setting expectations at rock bottom, so the media will proclaim him the winner if he can merely remain upright for the entire time. A second possibility is that they have come to the horrifying realization that their candidate is delusional, uninformed, lazy, and utterly unsuited to the presidency, and they’re hoping without evidence that these traits can somehow be hidden from the viewing public.