Well, OK, I guess I’d better do a quick Trump update. No, he still hasn’t made up his mind about his immigration policy, but he did respond to the shooting of Dwyane Wade’s cousin:

Dwyane Wade’s cousin was just shot and killed walking her baby in Chicago. Just what I have been saying. African-Americans will VOTE TRUMP!

Keep it classy, Donald. Next up, remember that letter from Donald Trump’s doctor claiming that Trump would be “the healthiest individual ever elected to the presidency”? Yesterday NBC News finally got an interview with Dr. Harold Bornstein, who justified this opinion by explaining that “all the rest of them are either sick or dead.” Roger that. This picture of Bornstein nearly brought down Twitter’s servers yesterday: 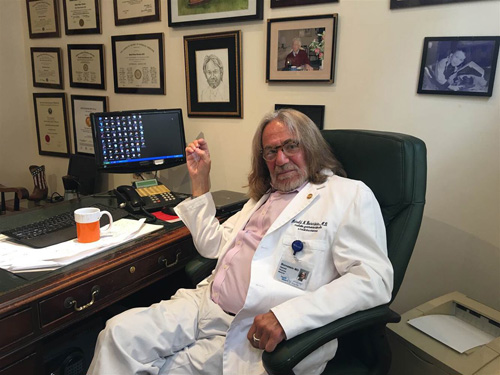 What else? Well, it turns out to no one’s surprise that Breitbart chief and now Trump campaign CEO Steve Bannon may be even more bigoted than we thought. The Daily News picked up this little nugget from his divorce proceedings:

Mary Louise Piccard said in a 2007 court declaration that Bannon didn’t want their twin daughters attending the Archer School for Girls in Los Angeles because many Jewish students were enrolled at the elite institution.

“The biggest problem he had with Archer is the number of Jews that attend,” Piccard said in her statement signed on June 27, 2007. “He said that he doesn’t like the way they raise their kids to be ‘whiny brats’ and that he didn’t want the girls going to school with Jews,” Piccard wrote.

Bannon’s spox told the Daily News that “at the time” he never said anything like that. They did not specify at which time he did say it.

Am I done yet? Oh my no. Next up is Trump supporter Paul LePage, the unhinged governor of Maine. LePage apparently thought that a Democratic legislator had called him a racist (he hadn’t) and left him a noxious phone message. Then he met with reporters to explain himself:

There were a few other items. There always are. But that’s enough. For those of you who didn’t pay any attention to the news yesterday, this has been your day in Trump.