In my post earlier this morning I made the case that economic anxiety really did play a role in blue-collar support for Donald Trump. However, many of you cleverly noted that I slid in a postscript at the end that basically made a hash of my argument—and everyone else’s. It’s simple: Trump isn’t actually doing unusually well among white, working-class men. And if Trump isn’t doing better among blue collar men in the first place, then there’s really nothing to explain. Not racism, not nationalism, not economic anxiety, not anything. Apropos of that, here’s a Pew table from a few weeks ago: 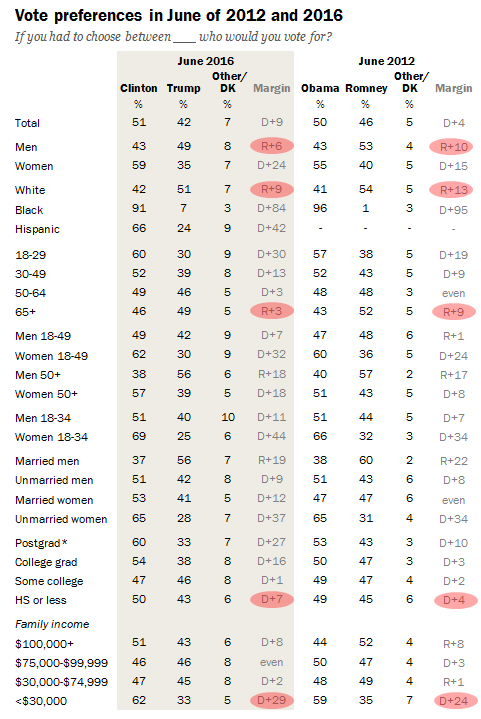 Compared to Mitt Romney—a garden variety Republican if there ever was one—Trump is:

So here’s the real story: Trump is basically just a Republican candidate for president, appealing to all the usual groups that Republicans appeal to—and this has been true during the entire campaign. Nationally, support for Trump has changed only modestly over the past six months. In fact, if there’s any difference at all, it’s the fact that whites and men and the working class are turned off by his overt appeals to racism and nationalism. The fact that Trump has a small base of very loud white supporters doesn’t change this.

It’s hard to draw firm conclusions from any of this. Maybe white, working-class men do like Trump’s racial appeals, but are turned off for other reasons. (For example, he’s a lunatic.) We’ll never know for sure. But what evidence we have really doesn’t support the idea that the white working class loves Trump in the first place. Given that, any effort to explain it is bound to be wrong.