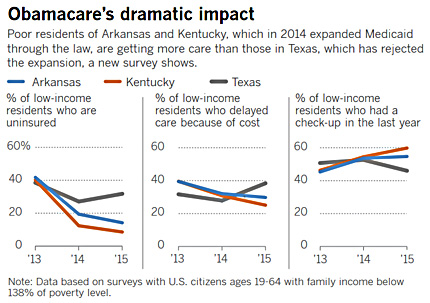 Noam Levey reports on some new research about Medicaid expansion:

“The effects of expanding coverage will be an unfolding story over time,” said Dr. Benjamin Sommers, lead author of the study, published in the journal JAMA Internal Medicine….Sommers and other researchers at Harvard University have been tracking the effect of Medicaid expansion by surveying some 9,000 poor residents in Arkansas and Kentucky, both of which expanded Medicaid eligibility, and in Texas, which has rejected the expansion.

In Arkansas and Kentucky, the share of poor adults without health insurance plummeted between 2013 and 2015, from more than 40% in both states to 14% in Arkansas and less than 9% in Kentucky.

In Texas, by contrast, the uninsured rate dropped only from 39% to 32%. Although Texas has not expanded Medicaid, state residents have been able to buy health insurance on the new insurance marketplaces that were also created by the law.

This, of course, is no surprise. If you expand Medicaid, more poor people will get medical care. If you don’t, they won’t.

Skeptics will suggest that more coverage is not necessarily better. However, I have yet to meet a single one of these skeptics who actually believes this enough to give up their own medical coverage. I’ll take them more seriously when that happens.