Donald Trump for the last week has been asking for support from African-American voters who have long backed Democrats, but his campaign has for months rebuffed invitations from supporters for the Republican presidential nominee to appear before black audiences.

….Michael Steele, a former chairman of the Republican National Committee, said he has passed along requests from historically black colleges for Mr. Trump to speak….“You don’t go to a white community to talk about black folks. Hello, it doesn’t make sense.”

Ms. Manigault,1 who was appointed to her position in July, said she would answer questions about her work for the Trump campaign over email but then didn’t respond to emailed questions. Trump campaign 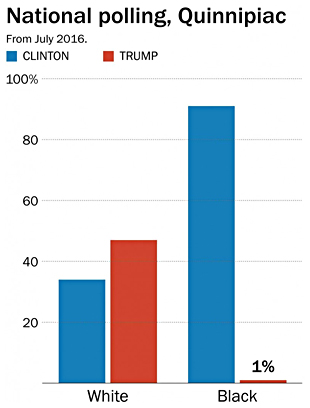 In a way, I guess I feel sorry for the authors of this piece. I mean, it’s obvious what’s going on. Trump couldn’t care less about black votes. His speeches are aimed like a laser at his white base, using language carefully calculated to assuage their fear of being called racist if they support him. Nobody in their right mind would give the speeches he gave if they were truly trying to address African-Americans.

But even though this is obvious to everybody, Reid Epstein and Michael Bender can’t come right out and say it. They can sort of imply it, if you’re smart enough to read all the hints in their piece. But most people probably aren’t that savvy. They’ll just see yet another back-and-forth about process and strategy in the Trump campaign and then turn the page.

I don’t know what the answer is. Tossing objective reporting onto the ash heap of history isn’t the answer. It’s extremely useful to have people who at least try to write neutrally. And yet, too often this gets in the way of reporting plain facts. So what should we do about this?

1This would be Omarosa Manigault, a contestant on the first season of The Apprentice. She is now Trump’s director of African-American outreach, which should give you a pretty good idea of just how much he cares about the black vote.