In his 2010 State of the Union address, President Obama blasted the Supreme Court’s Citizen United decision. It would, he said, open the floodgates for special interests to spend vast amount on our elections, “including 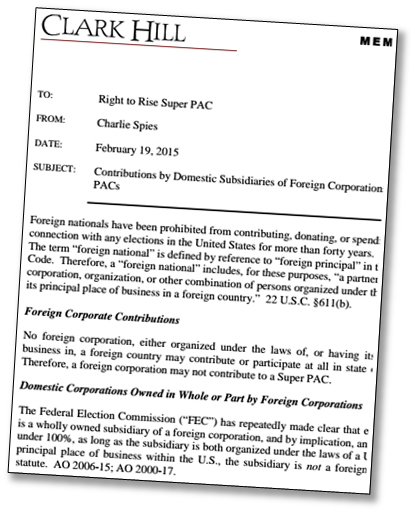 By chance, I was chatting about Citizens United and Alito last night. This morning, the Intercept has this:

A corporation owned by a Chinese couple made a major donation to Jeb Bush’s Super PAC Right to Rise USA — and it did so after receiving detailed advice from Charlie Spies, arguably the most important Republican campaign finance lawyer in American politics.

….Spies presented his advice in a memo, obtained by The Intercept, which he prepared for Right to Rise USA, where he served as treasurer and general counsel. “We conclude,” he wrote, “that a domestic subsidiary corporation may now directly contribute to a Super PAC in connection with a federal election.”

For campaign finance experts, Spies’s roadmap provides compelling evidence of a phenomenon many already suspected was well-entrenched. “Spies’s memo is an explicit how-to guide for foreign nationals to get money into U.S. elections through U.S.-based corporations that they own,” said Paul S. Ryan, deputy director of the campaign finance watchdog organization Campaign Legal Center. “It shows that although Obama was attacked in public for misleading Americans about Citizens United, in private people like Spies and others like him seemingly realized that Obama was right and set to work making his prediction a reality.”

There are still some hoops that rich foreigners have to jump through before they can donate to their favored candidate, but they’re not too onerous for anyone who’s serious. And as the authors note, money is fungible. Even if it technically comes out of the earnings of the US subsidiary, in the end it comes out of the pockets of its Chinese owners. Welcome to the brave new world the Supreme Court has given us.