Another popular theory is that when women live together, their menstrual cycles align. The idea has become a popular example of how pheromones can control us, but over time many studies have failed to replicate and confirm the finding. But for some reason, this idea is particularly resilient to debunking, living on in an abundance of newspaper articles and anecdotal conversations between friends.

I can propose one possible reason this idea resists debunking: Nobody is debunking it. I learned about this in college in the late 70s, when it was believed to be true. In the intervening 45 years, this is the first time I’ve heard that it’s wrong. That might be understandable if I didn’t read a lot, but I do. And I’ve never heard 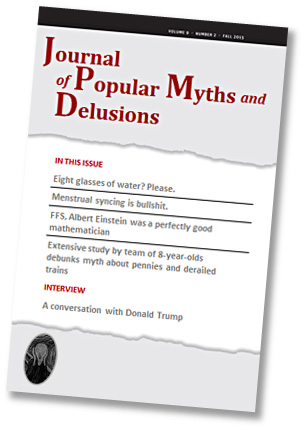 until now that the menstrual syncing theory hasn’t held up.

Eventually, I suppose, my generation will die off and younger generations will never have been exposed to this idea, but that process sure takes a while. In the meantime, we are all prisoners of the fact that fascinating scientific results always get a lot of media attention, while the slow work of falsifying them—which is rarely done in a single blockbuster study—ends up buried in academic journals.

Because of this, I think we need a new academic journal: The Journal of Popular Myths and Delusions, or some such. They would tackle things in two ways. First, when a popular theory gets to the point where it’s widely discredited in the scientific community, they’d write an article about it that would give news organizations a hook to report it. Second, they would annually commission a survey of known scientific falsehoods and then spend the following year debunking the most popular ones. I recommend they start with the whole eight glasses of water thing.