Labor productivity is in the dumps:

The longest stretch of productivity declines since the end of the 1970s is threatening to restrain U.S. worker pay and broader economic growth in the years ahead. Nonfarm business productivity, measured as the output of goods and services produced by American workers per hour worked, decreased at a 0.5% seasonally adjusted annual rate in the second quarter as hours increased faster than output, the Labor Department said Tuesday.

How big a deal is this? Just as a point of reference, here is labor productivity since the Great Recession: 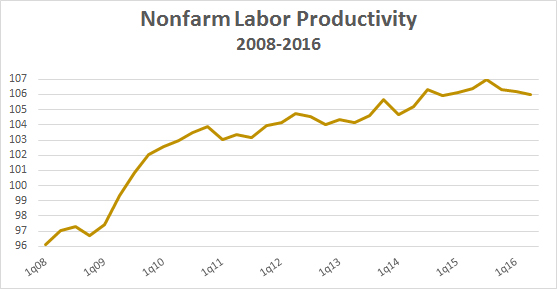 Productivity increased considerably in 2009-10 as businesses shed workers but kept producing the same amount of stuff. In 2011 that stopped, and ever since productivity has increased at a modest rate.

Now, this is a bumpy series, as most series are, and you can see that there have already been two periods just since 2011 in which productivity stalled for a full year or more: 4Q10 through 4Q11 and 2Q12 through 3Q13. We’re now in our third: 3Q14 through 2Q16. The recent nature of this series is that it goes up, then plateaus for a while, and then goes up again. So in that sense, it’s too early to get too panicked about the current plateau.

On the other hand, it has lasted seven quarters now, so we ought to be a little nervous about it. Productivity growth is probably the single most important component of national economic activity, and it doesn’t inspire a lot of confidence to see it dog paddling along like this. So don’t panic yet, but definitely stay tuned.