What kind of cat is Hilbert? Here is this week’s peek into his personality.

On Tuesday Marian made a tuna sandwich for lunch. That means tuna juice too, so she squeezed out the tuna juice into two saucers and put them out. Hopper came bounding over immediately and started lapping up the juice. Hilbert was slower off the mark, but eventually he figured out what was going on and shambled over.

But when he got to the saucers, he didn’t head to the unoccupied one. He went around the long way and stuck his snout into Hopper’s saucer and pushed her away. She shrugged, and headed over to the other saucer, which she lapped up. She had been almost done with the first one anyway.

So there you have it. Hilbert is more interested in taking away Hopper’s tuna juice than in actually having any tuna juice of his own. However, he also has a brain the size of a peanut and is unable to effectively carry out his nefarious intentions. In the end, Hopper got all the tuna juice.

In other words, he is not a cat we’d want to elect as president. But as a king? Sure. So here is his majesty up on the balcony, surveying his vast domains. I’m not sure what he’s looking at. Probably a crow walking across the skylight. 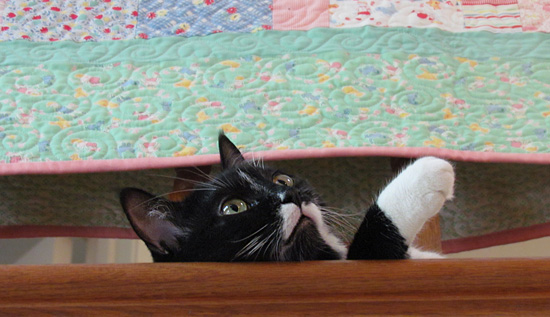