Uber is planning to beta test driverless Volvo taxis in Pittsburgh. Atrios, as always, is skeptical because Uber is planning to keep human “safety drivers” in the cars for a while until all the bugs are worked out. But this seems to me like nothing more than the standard way progress works. Eventually the Volvos will log enough miles to be sure the cars are safe, and Uber will apply for a permit to operate them totally autonomously. 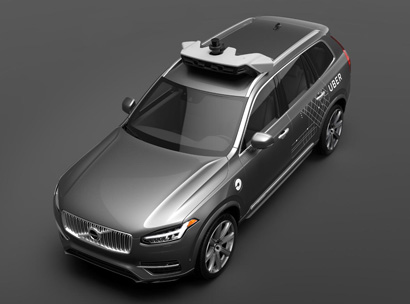 Another few million miles and they’ll be approved for permanent use. How else would you do it?

That aside, there are some interesting tidbits in the Bloomberg article:

On a recent weekday test drive, the safety drivers were still an essential part of the experience, as Uber’s autonomous car briefly turned un-autonomous, while crossing the Allegheny River. A chime sounded, a signal to the driver to take the wheel. A second ding a few seconds later indicated that the car was back under computer control. “Bridges are really hard,” Krikorian says. “And there are like 500 bridges in Pittsburgh.”

Wait. Why are bridges hard?

Bridges are hard in part because of the way that Uber’s system works. Over the past year and a half, the company has been creating extremely detailed maps that include not just roads and lane markings, but also buildings, potholes, parked cars, fire hydrants, traffic lights, trees, and anything else on Pittsburgh’s streets. As the car moves, it collects data, and then using a large, liquid-cooled computer in the trunk, it compares what it sees with the preexisting maps to identify (and avoid) pedestrians, cyclists, stray dogs, and anything else. Bridges, unlike normal streets, offer few environmental cues—there are no buildings, for instance—making it hard for the car to figure out exactly where it is. Uber cars have Global Positioning System sensors, but those are only accurate within about 10 feet; Uber’s systems strive for accuracy down to the inch.

A large liquid-cooled computer in the trunk! That actually sounds like a bit of a problem for a taxi, but I guess they’ll stay away from airports for the time being.