I could have chosen just about any newspaper for this, but here’s the Washington Post last night: 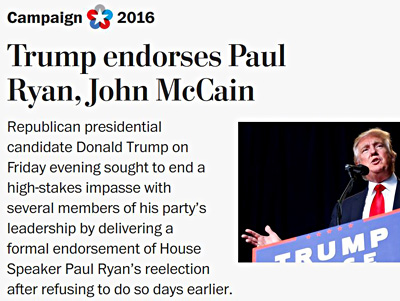 Drink this in: it’s front-page news that the Republican candidate for president has endorsed the Republican Speaker of the House for reelection. Front. Page. News. The New York Times says Trump did it in an effort to “heal” a “party rift.” If so, Trump sure was dragged kicking and screaming into it. He read off his endorsement with all the enthusiasm of a Cultural Revolution dissident reading a confession of his counter-revolutionary deviations to his fellow reeducation campmates.

Anyway, Hillary Clinton also got a tiny bit of press on Friday for once again bobbling her claim that James Comey kinda sorta exonerated her in Emailgate. But the operative word here is “tiny.” It might have been a bigger deal if everyone hadn’t been so busy writing about the latest episode of the Trump telenovela. And Paul Ryan is going to win regardless.

Bottom line: Trump says he’s the guy who’s going to win so much we’ll all get tired of winning. But he lost the news cycle completely on Friday for no reason and no gain, just so he could indulge yet another trivial personal feud. Nice work.