Negative yields on government bonds! That’s the hot topic in investor circles these days, especially now that Switzerland has issued a 50-year bond with a negative yield. But it’s worth keeping in mind that the inflation rate is Switzerland is currently about -1 percent, and expected to 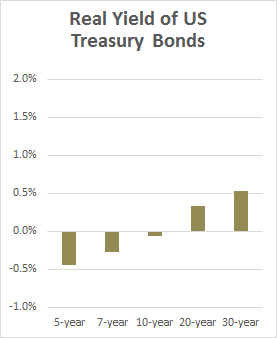 stay negative for some time. Given deflation of that magnitude, it’s not that surprising that bond yields are negative.

Here in the US, inflation is low but still positive, so nominal yields of US Treasury bonds remain positive for the time being. However, as in Switzerland, the real yield of US treasuries is negative until you get into the 20-30 year range. Real yields are higher than in Switzerland, but the difference has little to do with the safety of the bonds and everything to with investor sentiments about the likelihood of continuing low inflation in both countries. In Switzerland, with an aging population and a fierce dedication to tight money, it’s likely that inflation rates will stay low or negative for a long time. That’s less likely in the United States.

Even as yields fall in emerging-market debt, for instance, the credit quality of some of these countries is falling, analysts say.

….Changes in monetary policy could also trigger potential losses across the sovereign-bond world. Even a small increase in interest rates could inflict hefty losses on investors….Low yields, analysts say, are also distorting the signals for which bond markets are typically relied upon.

The recent collapse in the 10-year Treasury yield to record lows has produced signals usually associated with a slowing economy, for instance. That is despite little sign the U.S. is heading for a recession.

A big part of the housing bubble of the aughts was caused by investors chasing yield in a market that presented few opportunities. That could happen again, as investors become ever more desperate to find something—anything—that will provide an allegedly safe yield of more than a percent or two.

The real question, though, is why there’s so little opportunity for profitable investment in real-world business development and expansion. Is it truly because we’re entering an era of “secular stagnation”—that is, permanent low growth rates? That’s possible, given the aging of the population in most of the developed world. In any case, it’s probably the most important question in economics today. 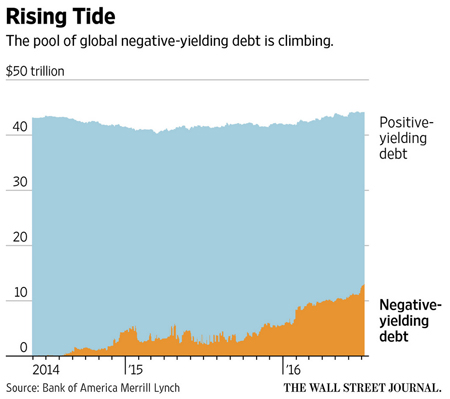