Here’s a fascinating study. A pair of researchers at the University of Georgia took a look at what happened to prescriptions for opioid painkillers in states that passed medical marijuana laws. Over at 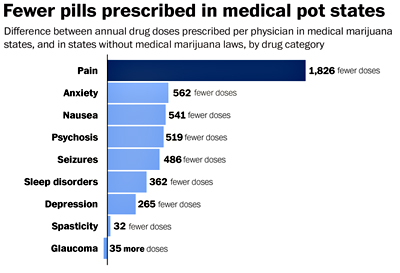 Needless to say, the painkiller industry would much rather have you gulp down their addictive and lucrative product. They are not taking the threat from medical marijuana lying down:

The tanking numbers for painkiller prescriptions in medical marijuana states are likely to cause some concern among pharmaceutical companies. These companies have long been at the forefront of opposition to marijuana reform, funding research by anti-pot academics and funneling dollars to groups, such as the Community Anti-Drug Coalitions of America, that oppose marijuana legalization.

Pharmaceutical companies have also lobbied federal agencies directly to prevent the liberalization of marijuana laws. In one case, recently uncovered by the office of Sen. Kirsten Gillibrand (D-N.Y.), the Department of Health and Human Services recommended that naturally derived THC, the main psychoactive component of marijuana, be moved from Schedule 1 to Schedule 3 of the Controlled Substances Act — a less restrictive category that would acknowledge the drug’s medical use and make it easier to research and prescribe. Several months after HHS submitted its recommendation, at least one drug company that manufactures a synthetic version of THC — which would presumably have to compete with any natural derivatives — wrote to the Drug Enforcement Administration to express opposition to rescheduling natural THC, citing “the abuse potential in terms of the need to grow and cultivate substantial crops of marijuana in the United States.”

The study estimates that if all 50 states legalized medical marijuana, Medicare would save $500 million per year in painkiller spending. It’s hard to extrapolate that to overall spending on painkiller medication, but the total savings would be on the order of $2 billion per year—maybe more.