Deutsche Bank says there’s a strong chance that the US economy will go into recession within a year:

The so-called yield curve suggests there’s a 60% chance of a U.S. recession occurring in the next 12 months, according to analysts at Deutsche Bank, led by Dominic Konstam….The bank’s fixed-income researchers looked at the difference between the three-month and 10-year U.S. Treasury yields, which has been narrowing sharply in recent months. Adjusting for the 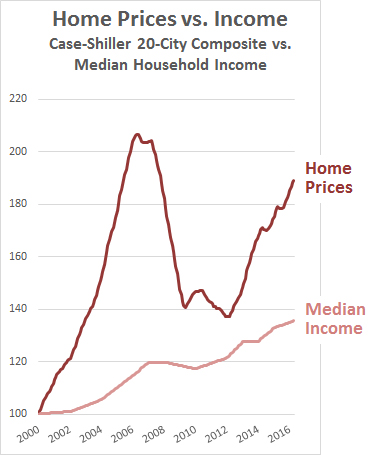 low level of short-term rates suggests that the yield curve is already inverted, they found.

“Given the historical tendency of a very flat or inverted yield curve to precede a US recession, the odds of the next economic downturn are rising,” the analysts found.

I’m not quite sure how predictive the yield curve is at the moment, but I have my own reasons for fearing a near-term recession. The chart on the right shows it in a nutshell: housing prices are getting near their bubble highs of 2006, while household incomes are growing slowly.1 There are lots of measures you can use to detect a housing bubble, but my standby has always been a simple one: house prices vs. income. At some point, if house prices outpace income by too much, people just can’t afford to buy new homes. Then prices fall and—if the decline is steep enough—a recession follows.

We’re not out of whack by as much as we were in 2006, but we’re getting there. Add in the length of the current expansion, Europe’s continued sluggishness, Brexit fears, and the Chinese slowdown, and there are plenty of reasons to be nervous about the economy. Our next president might have a pretty tough time in her first couple of years in office.