Has Mike Pence been good for Indiana? It probably doesn’t matter much, but I was curious anyway. For example, did he really enact the biggest income tax cut in the state’s history? It turns out the answer is yes: he enacted a cut from 3.4 percent to 3.23 percent. That may not sound all that gigantic, but it turns out the only previous income tax cut in state history was 0.1 percent. So Pence’s cut is the biggest! 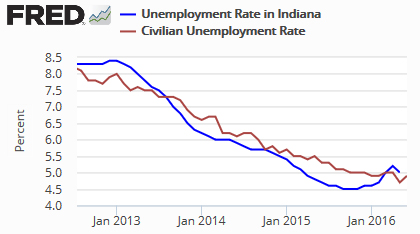 What about other economic trends? Are there more Hoosiers at work than at any time before, as Paul Ryan said while he was praising Pence? Sure. But thanks to population growth, that’s true almost everywhere. A better question is how employment compares to the nation at large. Answer: the unemployment rate since Pence took office in January 2013 has dropped from about 8 percent to about 5 percent. There’s nothing wrong with that, but it’s about the same as the rest of the country. 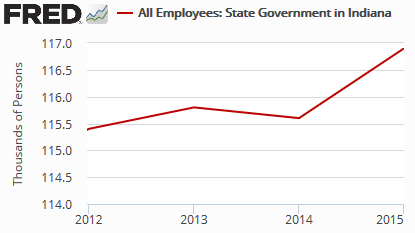 Is it true, as Pence said, that there are fewer state employees today than when he took office? I suppose there are multiple ways of counting this, but FRED tells us that the number of state employees has gone up from 116,000 to 117,000 since Pence took office. That’s pretty slow growth, but it’s not negative growth. Unless there’s been a big cut in state employees in the first half of 2016, I’m not sure why Pence would say this. 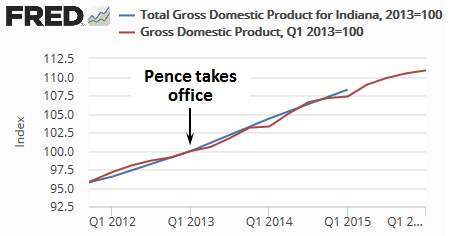 And how about the state economy in general? There are lots of ways of looking at this, but the simplest is probably state GDP. Regrettably, we only have that through the beginning of 2015. Still, if you take a look at GDP growth during Pence’s first two years in office, Indiana looks about the same as the entire country. There’s nothing to be ashamed of, but nothing much to write home about either.

Pence has cut taxes and cut spending, and so far he’s managed to avoid the disastrous experience of Kansas. Overall things seem to be OK in Indiana. But did Pence’s conservative policies produce an economic miracle? Not by any measure I can see.