Pew has another of its surveys out, this time a fairly generic presidential poll. They do this in June every four years, and they have a pretty good track record. Without further ado, here are the topline results: 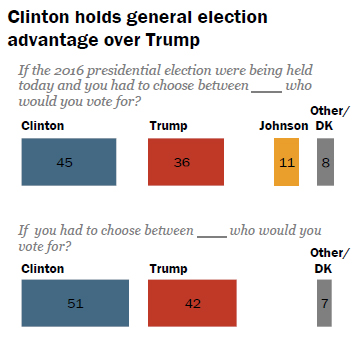 Hillary Clinton is 9 points ahead of Donald Trump regardless of whether Gary Johnson is in the race. A subsequent question makes clear there’s very little wiggle room here: among voters who support a candidate, nearly all of them say their choice is firm. Bottom line: there are very few undecided voters—who will probably break pretty evenly anyway—and everyone else says their minds are solidly made up.

So does Trump have a chance? Sure—though it’s slipping away. Voters are pretty non-thrilled with their choices this year, which means that turnout could make an even bigger difference than usual. But running a ground game requires lots of money and great organization, both of which Trump lacks. At this point, then, it looks like Trump’s only real chance is some kind of dramatic external event that suddenly turns voters his way. But I’m no longer sure what that could be. Serious economic problems are unlikely over the next 17 weeks, and terrorist attacks don’t seem to help him in the polls. So what is there?

I’m not sure. But if you’re wondering why Trump hasn’t broken through against a candidate who obviously has plenty of weak spots, I think Pew provides the answer. Trump’s campaign is fundamentally based on appealing to people who think they’re getting a raw deal from a lousy economy. But views on the economy are actually pretty positive: 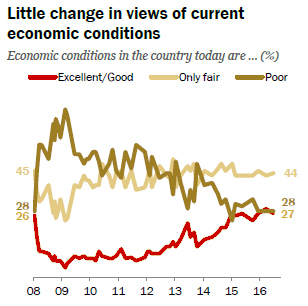 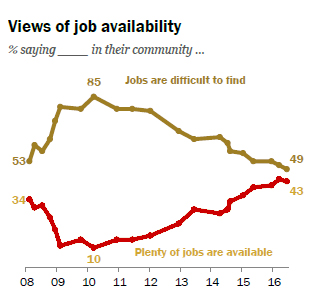 Overall economic optimism is back to where it was in 2008, before the Great Recession. That’s not very fertile soil for Trump’s campaign. Add to that his apparently inability to hold a coherent thought for more than a few minutes at a time, and it’s really hard to see a way for him to make up his current polling deficit.

POSTSCRIPT: Even Trump will probably get a post-convention bounce, but don’t let that fool you. Wait a couple of weeks and it will almost certainly go away.