Hillary Clinton has had a couple of poor showings in the polls recently, but I mostly shrugged them off. It was inevitable that she’d take a hit from the conclusion of the FBI email probe, but those kinds of things are almost always temporary. And it’s only July, anyway. Polls won’t start to mean too much until the middle of August.

That’s just my two cents, but Greg Sargent reports that it’s pretty much the opinion of the pros too:

I spent some time talking to senior Democrats today, and the basic feeling among them is this: Yes, it’s very possible Clinton did take a real hit from the FBI news. But if so, they see this as more of a temporary dip than anything else. They see the polling right now as mostly useless, since we will know a lot more about the race once both candidates choose their vice presidential running mates and the conventions take place later this month.

….One senior Democrat with access to a lot of private polling tells me that some surveys in states and districts where Clinton should be leading are showing her tied or slightly behind. But this senior Dem thinks the data probably reflects a momentary dip due to bad coverage of the FBI mess….Top Dem pollster Mark Mellman, for instance, conceded that Clinton may have taken a real hit. But he noted that the current polls, if anything, still show her up after a very tough stretch, leading into a period that could prove more favorable to her.

The fact that a man like Donald Trump is even within shouting distance of becoming president is reason enough to be nervous. But small blips in the polls don’t really add anything to that. If you’re the jittery type, stay away from the poll madness until next month. 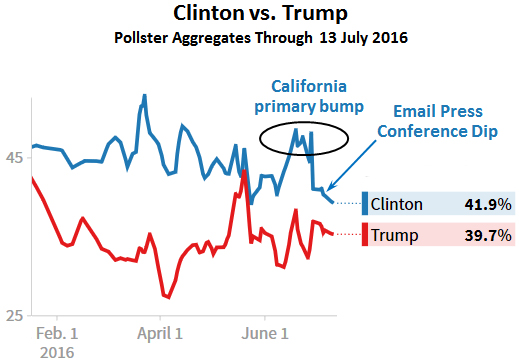