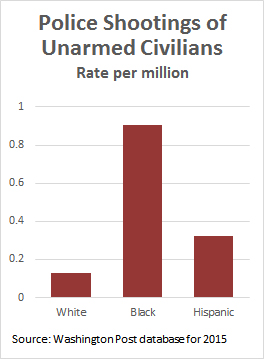 Jonah Goldberg has some sensible things to say about both Black Lives Matter and the killing of five police officers in Dallas:

At least for a moment, antagonists on either side of polarizing issues could see beyond the epistemic horizon of their most comfortable talking points. Black Lives Matter activists thanked the police for their protection and sacrifice. Conservative Republicans, most notably Speaker Paul Ryan and former Speaker Newt Gingrich, spoke movingly about race in America. Gun rights activists were dismayed that Philando Castille, the man shot by a police officer in Minneapolis, had followed all of the rules — he had a gun permit, cooperated with the officer, etc. — and was still killed. Liberals who insist that rhetoric from their political opponents inspires violence were forced to consider whether rhetoric from their allies might have helped inspire the shooter in Dallas.

….Former New York City Mayor Rudy Giuliani (who did not lose his lazy certainty) spent the weekend attacking the Black Lives Matter movement as “racist.” He wants people to focus on the fact that most black murder victims die at the hands of other blacks. That’s true, and tragic, and fairly irrelevant.

I’m continually nonplussed by the apparent inability of so many people to believe two things at the same time. Thing 1: Most police officers are conscientious public servants who perform dangerous jobs admirably and honorably. They’re my first call if I’m ever in trouble. Thing 2: They’re also human beings just like the rest of us, and fall prey to the same racial stereotyping that most of us do—but with guns in their hands. It’s hardly surprising that black activists are finally demanding better treatment from police in their communities. The only surprising thing is that it took so long.

Two things. Both true. And not so hard to believe at the same time.