Here it is, ladies and gentlemen, your outrage of the day: 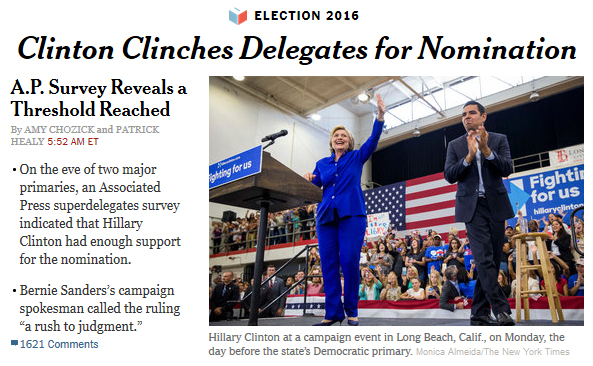 Bernie supporters are apoplectic. We haven’t even finished voting yet! What’s going on?

It’s simple. The AP keeps a running tally of delegates, and on Sunday Hillary won a few more in Puerto Rico. Then on Monday a few more superdelegates announced their support. On Monday evening the delegate counter ticked over the 2,383 mark and the AP moved a story saying she had officially won. The networks followed suit, and so did just about every newspaper in the country.

So was this the right thing to do? There are a couple of ways to look at it:

The timing of this was unfortunate, but I have to go with Option A. The tally is the tally. When it goes over 2,383 the AP declares a winner. The AP’s members expect them to deliver the news when it happens, not to hold it back until their editors decide it’s politically safe to release it. Besides, if they did hold it back, someone would probably be apoplectic about that.

On a separate note, the AP’s tally includes superdelegates, who aren’t technically pledged to a candidate. Superdelegates can announce their support, but they can also un-announce it at any time. Bernie supporters have thus argued for some time that they shouldn’t be included in any delegate count.

YMMV, but I don’t buy this. Whether you like superdelegates or not, they’re part of the Democratic Party process. Willy nilly, you have to count them. If you don’t, you’re putting a huge thumb on the scale.

On the bright side, at least Bernie supporters aren’t mad at Hillary this time around. By providing everyone with a common enemy, the AP is allowing the healing process to begin. Nice work, AP!