Over the weekend, Scott Winship commented on the latest CBO report about income inequality:

The best way to view the state of the middle class is to look at the median household incomes CBO reports. The pre-tax and -transfer median was only 12 to 20 percent higher in 2013 than in 1979….After accounting for [transfers and] taxes, which have declined significantly since 1979, median income rose 40 to 47 percent….This post-tax and -transfer measure is what really counts — it’s the closest measure we have to disposable income. From 1979 to 2013, the median grew by just shy of $20,000. Cite that number the next time the Economic Policy Institute tells you the middle class is doing terrible.

This kind of thing is really annoying. Post-tax-and-transfer is not what “really counts.” It all depends on what you want to know. If you want to know how the market economy is doing, you have to look at market income before taxes and transfers. Conversely, if you want some insight into the lived experience of families, then you want to look at post-tax-and-transfer income. They’re both useful for different things. Neither one is the “real” measure of income growth.

That said, many people, including me, are very interested in market income. That’s because we’re not big fans of letting the market go wild and then trying to make up for its worst excesses via social welfare programs. We’d rather try to regulate the markets to provide more equal outcomes in the first place, and you can only do that if you know what market incomes are to begin with. So here’s a look at market income growth since 1979: 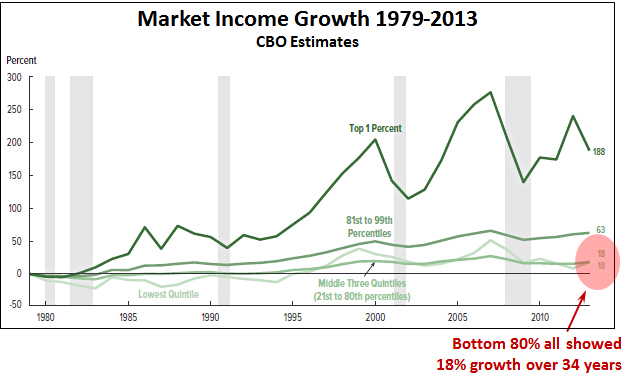 That’s an increase of about half a percent per year for the non-rich. We ought to do better. In real life, however, there’s a limit to how much balance you can squeeze out of the market, which means that social welfare programs are important too. So I’m also interested in post-tax-and-transfer income, which gives me an idea of how well we’re doing to help the people who need it most. In other words, both measures of income are important, and neither one is “what really counts.”

But there’s more! Winship wants to focus on post-tax-and-transfer earnings because his life goal is to convince everyone that income growth for the middle class has actually been pretty good lately. Toward that end, he makes the point that baby boomers are retiring, and many of them have modest market incomes because they rely mostly on Social Security and Medicare. “As retirees become a bigger share of the middle class over time, their lack of pre-transfer income pulls down the median.” So please ignore market income, which has increased a dismal 12-20 percent since 1979! It only looks stagnant because of all those retiring boomers. Look instead at average post-tax and transfer income, which has increased 40-47 percent.

Well, maybe seniors do pull down the average a bit. But we shouldn’t stop there, should we? If seniors rely heavily on transfer income, it stands to reason that working-age families don’t. In fact, it turns out that only about a quarter of all transfer income goes to non-seniors,1 and nearly all of that goes to low-income families. Middle-class families of working age get very little.2

This means that non-elderly middle-class families have had to rely mostly on market income since 1979—along with a few crumbs of tax cuts.3 Which in turn means the increase in middle class earnings for working-age families since 1979 is a whole lot closer to 12-20 percent than it is to 40-47 percent. Cite that the next time you decide to sneer at the Economic Policy Institute.

2Table 3 of the CBO report. Excluding benefits for the elderly, the middle quintile gets only 7 percent of its income from government transfers, mostly from Medicaid.

3Figure 2 of the CBO report.