The Supreme Court has overturned HB2, a Texas law designed to all but eliminate access to abortion in the state:

One part of the law requires all clinics in the state to meet the standards for ambulatory surgical centers, including regulations concerning buildings, equipment and staffing. The other requires doctors performing abortions to have admitting privileges at a nearby hospital.

“We conclude,” Justice Breyer wrote, “that neither of these provisions offers medical benefits sufficient to justify the burdens upon access that each imposes. Each places a substantial obstacle in the path of women 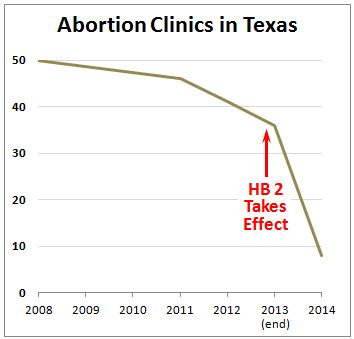 seeking a previability abortion, each constitutes an undue burden on abortion access, and each violates the Federal Constitution.”

HB2 was an obvious TRAP (Targeted Regulation of Abortion Providers) law. Its provisions do virtually nothing to protect women’s health, but they do make it nearly impossible for most abortion clinics, especially those outside large cities, to operate. In the aftermath of the law’s passage, the number of abortion clinics operating in Texas plummeted almost immediately.

It was obvious from the start that this ruling would split on partisan lines, with Anthony Kennedy as the tiebreaker. This means that probably the most important thing we’ve learned today is just how far Kennedy can be pushed. He’s voted in favor of several abortion restrictions over the past decade, but this one went too far. In practical terms, that means abortion opponents have tested the limits of what they can get away with, and the Texas law represents the outer boundary.

More here from the majority opinions.