Jacob Bogage tells us that backup cameras in cars aren’t really helping that much:

Backup cameras have been around longer than other car safety tech, so the federal government has years of data on their effect. Between 2008 and 2011 — the most recent years for which data was made available by NHTSA — backup cameras more than doubled from 32% to 68% of all new cars sold. But injuries fell less than 8%, from about 13,000 down to 12,000. The improvement in safety has been very gradual from year to year.

The fatality rate has improved somewhat, dropping 31% over the same period. But the sample size is small — deaths from cars moving in reverse are relatively rare. NHTSA’s research shows deaths declined from 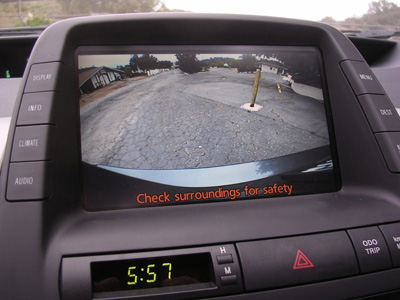 My current car is the first I’ve driven that has a backup camera, and this story doesn’t surprise me. As near as I can tell, using a backup camera requires you to change your driving habits, and it took me a while to figure that out. The most basic problem is that backup cameras—like most video screens—beg for your attention, and if you give in to that temptation you might very well be driving less safely than without a camera. The problems are pretty obvious:

So how should you drive with a backup camera? Ironically, you need to change your driving habits back to what they were before you got a backup camera. That is, you should treat it as simply another window. Don’t obsess over it. Crane your neck and check all your windows and your rearview mirror and your backup camera. In other words, drive just like you used to except with one additional window. Too many people treat backup cameras as a substitute for all their other windows, instead of an addition to them.