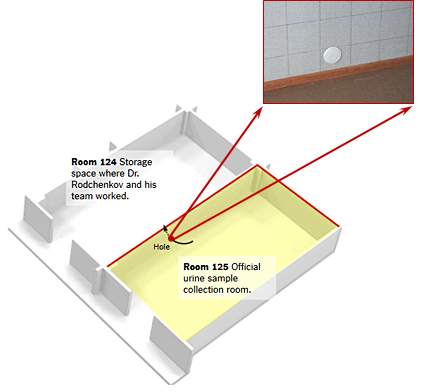 The IOC has voted to ban Russia’s track-and-field team from the 2016 Olympics due to its widespread and relentless doping operation:

Days before Friday’s vote, the World Anti-Doping Agency released information calling into question the credibility of Russia’s reforms. The agency said the testing authorities from the United Kingdom, in collecting urine samples, had been threatened by members of Russia’s Federal Security Service and that many athletes — a significant number of them track and field competitors — had evaded authorities to escape being tested.

Many athletes outside Russia had agitated for the vote to happen as it did. In recent weeks, Olympians have called on sports officials to conduct further investigations into the extent of the cheating of which Russia has been accused, extending across the spectrum of sports.

“Athletes have been losing sleep,” said Lauryn Williams, a track and field and bobsled athlete from the United States. “You can’t have faith in anybody who is Russian.” Whistle-blowers have provided further details on the clandestine doping scheme the report described. Fearing for their safety, at least three of them have fled to the United States.

The Times graphic above shows just how sophisticated the Russians were at the Sochi Winter Olympics. To evade the Javert-like doping cops at the IOC, they…drilled a hole in the urine collection room and passed bottles back and forth. I wonder why no one else has ever thought of that?