Donald Trump stood in front of a pile of scrap metal yesterday in Pittsburgh and blasted both NAFTA and the accession of China into the World Trade Organization. He was positively poetic about how his trade policies would affect the steel industry:

A Trump Administration will also ensure that we start using American steel for American infrastructure.

Just like the American steel from Pennsylvania that built the Empire State building.

It will be American steel that will fortify America’s crumbling bridges.

It will be American steel that sends our skyscrapers soaring into the sky.

It will be American steel that rebuilds our inner cities.

There’s no question that the American steel industry has suffered over the past three decades, thanks to cheap steel imports from other countries. But this began in the 1980s and had almost nothing to do with either NAFTA or China. Take a look: 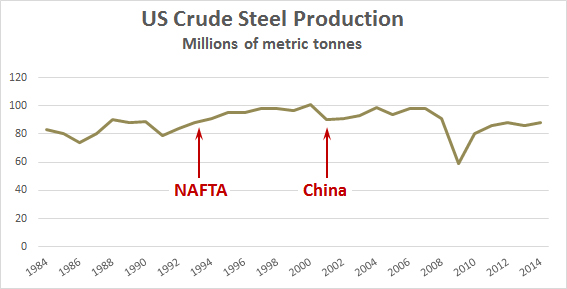 Do you see a sudden slump in US steel production after NAFTA passed? Or after China entered the WTO? Nope. Other countries simply produced steel more cheaply than we did. It started with Japan and South Korea in the ’80s and later migrated to other countries not because of trade agreements, but because Japan and South Korea got too expensive. And it’s not as if no one noticed this was happening. Ronald Reagan tried tariffs on steel and they didn’t work. George H.W. Bush tried tariffs again. They didn’t work. George W. Bush tried tariffs a third time. No dice.

For all his bluster, when it came time for Trump to lay out his plan to “bring back our jobs,” it was surprisingly lame. It was seven points long but basically amounted to withdrawing from the TPP and getting tough on trade cheaters. This would accomplish next to nothing. TPP’s effect is small to begin with, and we’re already pretty aggressive about going after trade violations.

The bottom line is simple: If we want access to markets overseas, we have to give them access to our markets. Donald Trump can claim he wants to bring back the jobs we’ve lost to overseas competition, but he’d have to back that up by essentially promising to withdraw completely from NAFTA and the WTO—and then promising to build a huge tariff wall around the entire country. He’s not willing to do that because even he knows it would trash the US economy. So instead he blusters and proposes a toothless plan. Sad.