A new Pew report says that Hispanics are pretty optimistic about the future. Ben Casselman comments:

Hispanics’ optimism seems to fly in the face of one of the dominant narratives of this year’s presidential campaign: voters’ economic anxiety. Despite an economy that has, by most conventional measures, improved by leaps and bounds since President Obama took office, Donald Trump and, to a lesser degree, Bernie Sanders have successfully tapped into a deep well of anger and fear about the country’s economic direction. But that anger is concentrated among whites; many minority voters, as the Pew survey shows, are far more optimistic.

A few months back, I argued that voters’ anger stems more from longer-run anxiety than from concern over their immediate economic prospects….Gallup in recent months has shown a divergence between Americans’ relatively positive assessment of their current economic conditions and their increasingly pessimistic outlook.

But for many non-whites, the pattern is the opposite: They are concerned about the present but optimistic about the future….40 percent said their finances were in good shape, compared with 43 percent for the public at large — but they see brighter days ahead. More than 70 percent expect their children to be better off than they are.

If you insist on continuing to look at this year’s election through an economic lens, you’ll never figure out what’s going on. Overall, middle-class incomes have been pretty stagnant over the past couple of decades: up during the dotcom boom, down during the Great Recession, and ending up pretty close to where they were in 1994. That’s obviously a source of frustration. But it’s not as if this only affected whites while blacks and Hispanics have been kicking ass: 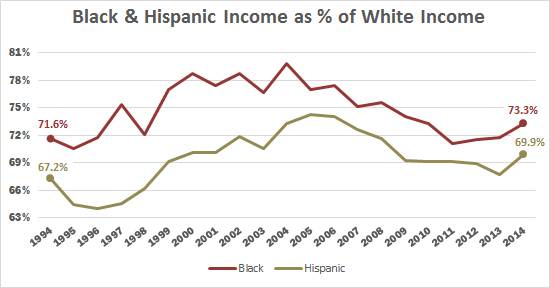 “Economic anxiety” as a campaign issue has always been a red herring. And even if you back off a bit and try to limit it solely to the notion that whites are losing ground to minorities, the evidence still doesn’t back you up. You can cherry pick here and there if you want to make that case, but it’s tough sledding. Basically, everyone’s been in the same boat, and blacks and Hispanics haven’t really made up any ground versus whites.

If you want to get to the root of this white anxiety, you have to go to its roots. It’s cultural, not economic. It’s demographics, not paychecks. It’s about not being the boss anymore. It’s about lower-class white communities now exhibiting pathologies—drug abuse, low marriage rates, etc.—that were once reasons for them to look down on blacks.

Really, we just need to give up on the whole “economic anxiety” argument. When something only affects whites and lacks any real economic motivation, race is a whole lot more likely to explain things than jobs. Let’s not keep looking around the economic lamppost just because the light is better there.