Donald Trump’s core support is, famously, concentrated among whites with high school degrees or less. Via Ronald Brownstein, here’s how these folks feel about cultural change: 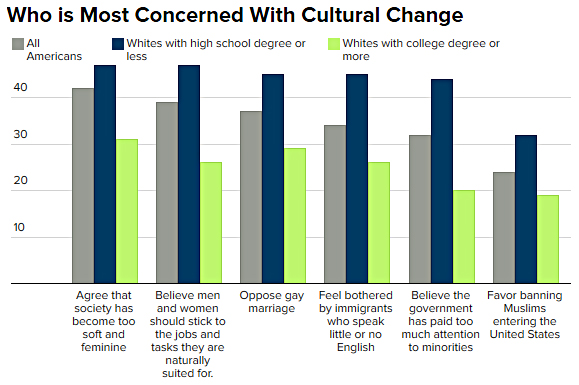 Why bring this up? I realize I’m beating a dead horse here, but this particular horse needs to be put well and truly out of its misery. These folks aren’t voting for Trump because of economic angst. That may play a minor role, but it’s not what really bugs them. The economy has been picking up for years and all of the evidence suggests that most Trump supporters are doing at least OK financially. What bugs them is culture war stuff.

This is nothing new. These are the same folks who deserted George McGovern over acid, amnesty, and abortion. They’re the Reagan Democrats. They’re the Rush Limbaugh shock troops. They’re the core audience for Fox News. They’re the tea party. They’ve been deserting the Democratic Party over “family values” for more than 40 years.

This is important not because liberals should spend more time berating these folks as racist and sexist and homophobic. We should probably do less of that. It’s important because everyone needs to understand what it would take to peel off Trump’s supporters. It’s not going to happen by campaigning on Wall Street regulation or trade deals or the minimum wage. It can only happen by soft-pedaling liberal support for civil rights, gay rights, immigration reform, and so forth. Does anyone want to do that?

I didn’t think so.

Once and for all, let’s put the whole “economic angst” argument into the ashcan of history. It’s out there. It’s an issue. But it’s not a big one. The folks who support Trump are doing it because they think white male culture is under siege. That’s why Trump doesn’t spend much time talking about his tax plan but does spend day after day ranting about judge Gonzalo Curiel being unfair to Trump because he’s “of Mexican heritage” and a member of a Latino lawyers’ association. His followers eat that stuff up, and we’re going to be hearing a lot more of it over the next few months.