Here is Donald Trump talking to an evangelical audience on Tuesday about how he raised his children:

I always tell people, “No drugs, no alcohol, no cigarettes.” And I add to some — if it’s appropriate: I say, if they go to church and if they start at a young age, that’s a tremendous asset…. I went to Sunday school at First Presbyterian Church in Jamaica…. It was like, you go to Sunday school, you have to do that…. Today, I don’t think it’s so automatic. And maybe we can get back into a position where it’s automatic.

You might have noticed that this item is from yesterday. So was the picture of Trump with Jerry Falwell Jr. My post this morning about Utah v. Strieff is two days late. What’s going on with that? Well, you know how your inbox can get filled up and you just get behind on 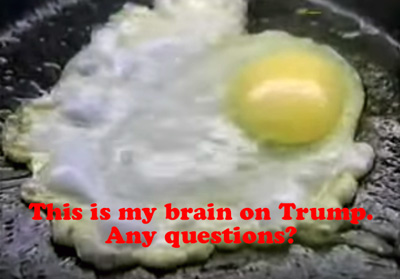 everything? That’s how I feel. My brain is hopelessly backed up and I’m behind on everything. Sometime tomorrow I’ll finally figure out what happened today.

I blame Trump for this. He’s brought a level of gobsmacking idiocy to the news that worms its way into my brain and won’t let go. I get obsessed with what he’s blathering about. Did he really say that? And people believed it? There has to be something more to it. But what? Has our national bullshit detector suddenly gone pear shaped? Why? How is it that 45 percent of the country apparently doesn’t realize that he’s basically just a talented used car salesman? It makes no sense. There’s no way that anyone with even the slightest experience of real life could fail to see that he lies practically every time he opens his mouth. That he can’t be trusted to do even the smallest thing he promises. What’s going on? WTF. IS. GOING. ON?

This is my brain on Trump. It wants answers. But there are no answers. Just endless, endless spinning. It is trapped in a world gone haywire.