The day before the Brexit vote, Nick Clegg, the former leader of the Liberal Democrats, wrote a piece titled “What you will wake up to if we vote to Leave…” It’s astonishingly prescient and worth a read. Apparently not very many people believed him, though.

But he was totally right, and no one knows what the hell is going on anymore. The process of leaving the EU officially starts when Britain invokes Article 50 of the EU charter, but oddly enough, no one seems to be especially eager to do 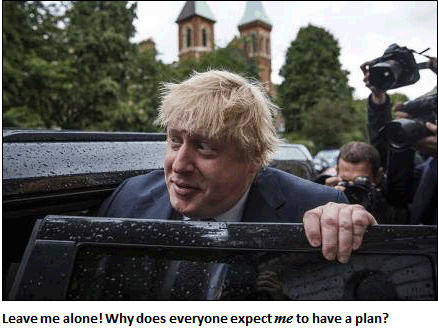 that. David Cameron, the caretaker prime minister, has announced that he doesn’t plan to do this anytime soon, and Boris Johnson, the leader of the Brexit forces, seems to be OK with that:

Mr. Johnson offered no details about when or how Britain should invoke Article 50 — the formal process for leaving the European Union — nor did he lay out a plan for how Britain could maintain free trade with the European Union, the world’s largest common market, without accepting the bloc’s demand for the unrestricted movement of workers.

Meanwhile, the pound continues to fall and the financial community continues to panic. Tomorrow the Labor Party will hold a vote of confidence on its leader, Jeremy Corbyn, which he’s expected to lose by a landslide. Scotland is threatening to secede yet again. And the EU is saying that if Britain wants to retain access to the common market, then they have to accept free immigration too:

If it wants access to the bloc’s single market, post-Brexit Britain must accept EU freedom of movement rules and the supremacy of the European Court of Justice, EU diplomats have warned ahead of a vital summit. The idea that Britain could have access under a European Economic Area style deal and impose border controls was a non-starter, diplomats said.

Well, who knows? Maybe that’s just their opening negotiating position. But the Brexiteers are in for some serious trouble if it turns out that the price of access to the European market is the very thing that prompted their victory in the first place.

What a mess. And all for nothing.