A week from today, Brits will flock to the polls to vote on whether they want to remain part of the EU. Justin Hughes, the chief US negotiator for two recent international treaties, writes in the LA Times that British voters should ignore what Americans are saying about all this. That’s fair enough. We did just nominate Donald Trump to lead one of our two major parties, after all. We’re hardly in any position to be giving anyone else political advice at the moment.

Toward the end, though, Hughes offers up this:

Obama’s activism may reflect a larger concern: that a British exit from the EU would commence a full unraveling of the European Union. If that is what he’s thinking, it is a bit insulting to Europeans because it fails to appreciate the full scope and depth of continental Europe’s post-1945 integration. The immediate refugee crisis and the long-term Euro debt crises are greater hazards to a united Europe than whether Britain leaves the club.

I’d put this differently: The refugee crisis and the Euro crisis are bad enough already for EU solidarity. Add to that the growth of right-wing nationalist parties throughout Europe, and are we really sure that Brexit might not be enough to spur the “full unraveling” of the EU that Hughes scoffs at?

I’d put the odds of that pretty low. Maybe around 5-10 percent. But not zero. Why am I so relatively pessimistic? Because:

Put all this together, and I’m not convinced that Brexit is as benign as Hughes suggests. But then again, a year ago I didn’t think Donald Trump had a chance of winning the Republican primary, either. So what do I know? 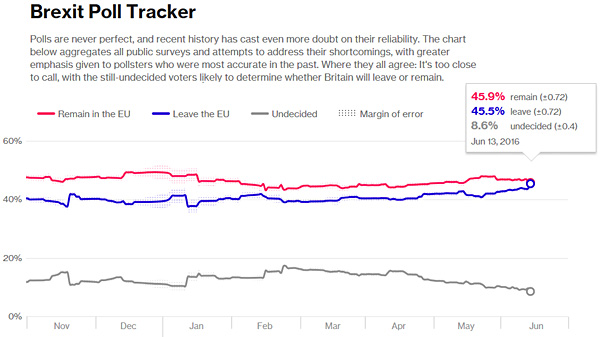